Last October, back in the days where we could meet physically in actual auditoriums, I gave two talks about the history of astronomy, practical mathematics, observers and voyages of scientific exploration. They are both now available to view online.

Expeditionary Astronomers: the 1769 Transit of Venus and British Voyages of Scientific Exploration, at the Royal Astronomical Society on 11 October 2019 (30 minutes).

Mathematical Practice and 18th-Century British Voyages of Scientific Exploration, at the Museum of London for the annual Gresham College Lecture of the British Society for the History of Mathematics on 23 October 2019 (45 minutes).

Yesterday, a Blue Plaque was unveiled to the botanist, and philosopher and historian of botany, Agnes Arber (1879-1960). This event both paid tribute to a pioneer who made a significant mark in her field and reflects the English Heritage scheme’s ambition to increase the numbers of women and other under-represented groups commemorated by its plaques. I am a member of the Blue Plaque panel and was delighted to lead the speeches at the unveiling in Primrose Hill.

END_OF_DOCUMENT_TOKEN_TO_BE_REPLACED

An edited version of this review appeared in the British Journal for the History of Science in December 2015.

The twelve chapters in this volume are drawn from papers given at the 2010 Scientific Instrument Symposium, which met in the newly renovated Museo Galileo and took the theme “Instruments on Display”. Some of the contributions are fairly slight in length and analysis, but together they encourage “thinking about the cultural, technical or scientific significance of how scientific instruments have been displayed in venues other than those for which they were originally made”, even if they do not quite lead to “general frameworks” for such thoughts (p. xvii). The usefulness of the collection is in its variety. “Display” and “instruments” are interpreted broadly, generating a plurality of meanings that reflect changing views of science, instruments, the public, museums and markets. Instruments rather rarely appear as tools but are, instead, commodities, relics, adornments, scenery and means of educating or conveying national, cultural, institutional, scientific or technical histories. Likewise, while “display” often relates to museum galleries and exhibitions, it also points to schoolrooms, laboratories, observatories, showrooms, theatres, cinemas, books and portraits.

END_OF_DOCUMENT_TOKEN_TO_BE_REPLACED

Biography within the history of science has repeatedly been rescued, revived and reconsidered: from Thomas Hankins’s 1979 ‘Defense of Biography’, to the essays in Telling Lives in Science (1996, eds. Michael Shortland and Richard Yeo), the 2002 workshop that led to The History and Poetics of Scientific Biography (2006, ed. Thomas Söderqvist), the 2006 ‘Focus’ section in Isis and now this collection. Many of those who have written biographies have been reflexive about their motivations and their version of their subject’s life and character. Richard Westfall, for example, produced some fascinating reflections for the 1985 collection Introspection in Biography, showing the wisdom of B.J.T. Dobbs’s comment that Newton is “something of a Rorschach inkblot test” for historians (Isis 85 (1994), 516). Those academic biographies of major figures have, after all, still been produced and, as Margaret Rossiter and Pnina G. Abir-Am led the way from the 1980s onward, so too have collections and considerations of lives of women scientists.

END_OF_DOCUMENT_TOKEN_TO_BE_REPLACED

Cross-posted from The H Word blog, where this post first appeared on 12 September 2013.

This evening, the Astronomer Royal, Lord Rees, will weigh into the debate about climate change and geoengineering in an address at the British Science Festival.

Finding such fixes, as well as more efficient forms of alternative energy, may well be problems focused on by the new challenge prize that Rees has helped set up. That he, as Astronomer Royal, will be judging what has been called a new ‘Longitude Prize’, seems appropriate, but the innovations under consideration may be a long way from his own field of astronomy and cosmology.

Today the post of Astronomer Royal is honorary. It means simply, as Alok Jha’s article on Rees’s speech suggests, that he is “one of Britain’s most senior scientists”. Like a Chief Scientific Advisor, or the head of a scientific society, the Astronomer Royal can be expected to give all sorts of opinions about science and science policy, straying at least occasionally, if they wish, well beyond their area of research.

Was it always like this? Yes and no. Until the 1970s the post of Astronomer Royal was synonymous with director of the Greenwich Observatory (at Greenwich, Herstmonceux and then Cambridge). Before the 19th century, the AR was also an active observer, in fact only one of two observers in the institution.

Nevertheless, Astronomers Royal were often called upon to make judgements and offer advice in areas that did not relate to making observations or managing an observatory. Because the Royal Observatory was funded by government, being under the administration of first the Board of Ordnance and then the Admiralty, there was potential for them to be asked to consider a whole range of technical and scientific issues.

For much of the AR’s history, the most obvious place in which this happened was the Board of Longitude. While many of the ideas under consideration were astronomical (involving knowledge of astronomical theory, mathematics, optics and instrumentation), others were based on geomagnetism or, of course, horology. Understanding clocks and timekeeping was essential to astronomy, but the specifics of horological theory and manufacture would have been beyond the AR’s experience.

ARs also advised on areas like cartography, instrument design and weights and measures, that involved techniques closely allied to astronomy. But they were also asked to consider a wide range of fields of interest to the Admiralty and other branches of government, simply because they ended up being their available scientific expert.

One of the ARs who most obviously became the government’s go-to scientific and technical guy was George Airy, who was in position from 1835 to 1881. Airy covered a great deal of ground, intellectually and practically. Unlike all his predecessors he was not much involved with daily observations and he had a significantly larger workforce at the Observatory, onto which observation, calculation and even management could be delegated.

Airy, for example, did a considerable amount of work on the effect of iron ships’ hulls on compass use and design. He also advised, like many other ARs, on education and he was involved in the organisation of the Great Exhibition. He was, perhaps most intriguingly, called in to advise the Great Western Railway on track gauges and the engineer Thomas Bouch about the pressures that might be exerted by wind on the planned rail bridge crossing the Forth.

That latter advice got him into trouble. It was first applied by Bouch to the Tay Bridge and, when that collapsed in 1879 [see image above], Airy was called in by the enquiry. He claimed that his advice had been specific to the circumstances of the Forth and the design for that bridge (which was now speedily discarded). The enquiry agreed, suggesting that Bouch had “must have misunderstood the nature of [Airy’s] report”.

Airy did know quite a lot about engineering. He was, apart from anything else, closely involved with the design of large instruments and their mounts at Greenwich. Times and the nature and range of expertise have changed considerably since the 19th century, however. Lord Rees is not an Astronomer Royal who can offer specific or technical engineering expertise, rather he is calling for research and funding. Whether or not you agree with his statements is a different matter.

Over on the Longitude Project blog, there are two posts commenting on the newly refurbished National Museum of Scotland and the display on astronomy, navigation, time and longitude. Katy’s At Sea in Edinburgh, while I muse on Edinburgh objects and on why history of science gets extracted from art, history and culture.

The last few posts on the Longitude Project blog have seen Richard and I travelling again, but this time in Europe rather than the new world, and indulging in some longitude tourism. Richard, at the Scientific Instruments Commission conference in Kassel, has been tracking Tobias Mayer in his Mayer odyssey parts one and two. I, meanwhile, have been in Paris enjoying a French sojourn. I’ll be posting more on the conference I was attending here later, but for more on the Greenwich-Paris and longitude connections, read more here.

The latest edition of The Giant’s Shoulders history of science blog carnival is now up at the Longitude Project Blog. Enjoy!

Last week saw the annual conference of the British Society for the History of Science, held at the University of Exeter. I have been going to these conferences for the last nine years and have always enjoyed them as convivial and intellectually stimulating occasions. As with all large(ish) general conferences with several parallel sessions there can be negatives: it’s hard work, there are usually a few annoing clashes in scheduling, and there is too little time for discussion during the sessions. However, historians of science are a friendly bunch and it is very easy to catch the person whose paper you had to miss to find out more, and to have discussions over lunch, dinner, drinks and into the night. All the better this year that the backdrop to such conversations was this glorious: 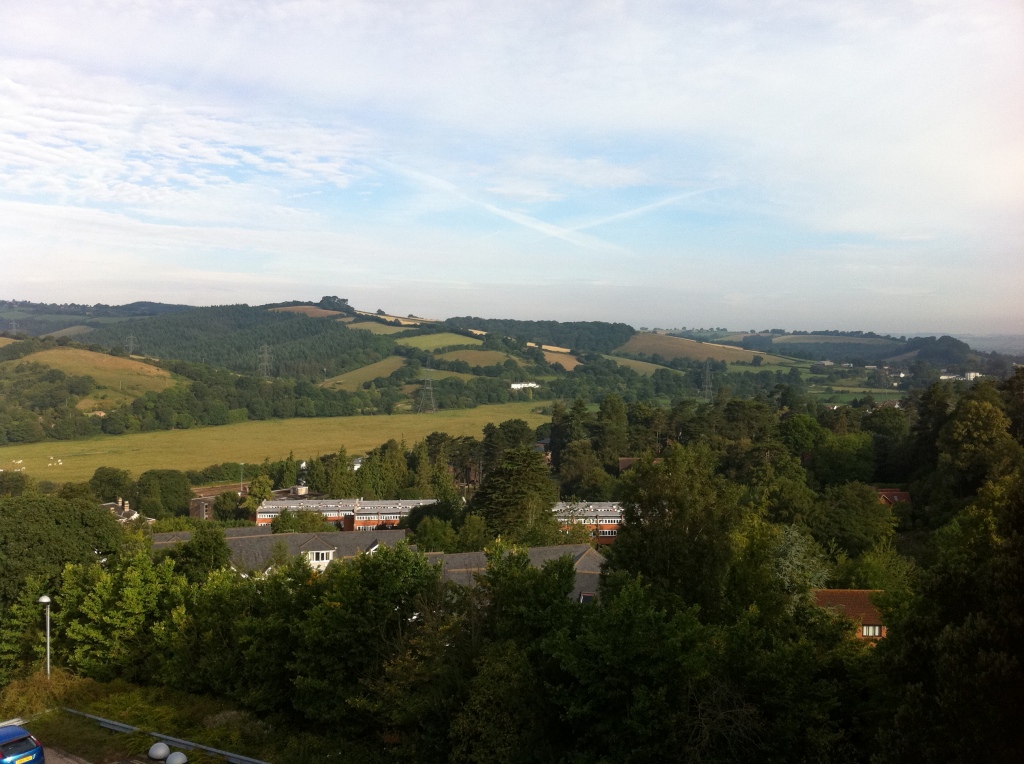